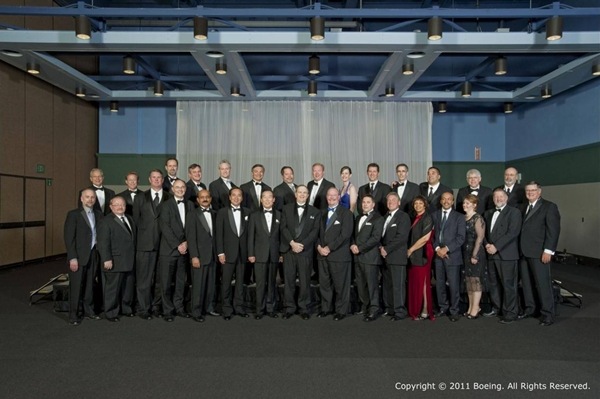 Tokyo (June 29, 2011)—Bridgestone Corporation has been recognized as Supplier of the Year in the Electrical/Hydraulic/Mechanical Standards category by the Boeing Company. Bridgestone was one of 16 companies honored May 18 for distinguished performance in working with Boeing. This is the second consecutive year that Bridgestone has received this prestigious honor. In January, Bridgestone was notified that it was one of 558 companies to receive the Boeing Performance Excellence Award which rewards suppliers for excellence. Achieving the Supplier of the Year designation further acknowledges superior performance and designates this class of winners as best of the best. “The Boeing supplier network is a global community of the best companies who help us build the world's best aircraft, satellite and defense systems," said Stan Deal, Vice President and General Manager of Supplier Management for Boeing Commercial Airplanes. "To be one of just 16 selected for a Boeing Supplier of the Year award says a great deal about Bridgestone's commitment to consistently achieve high standards of quality, productivity and efficiency in support of our customers." This year’s winners represent an elite group among more than 17,500 active Boeing suppliers in more than 50 countries around the world. This selection was based on stringent performance criteria for quality, delivery performance, cost, environmental initiatives, customer service and technical expertise. Bridgestone currently supplies aircraft tires for Boeing aircraft including Boeing 737-900ER, Boeing 747, Boeing 767 and Boeing 777. Additionally, the Boeing 787 Dreamliner is scheduled to go into service with Bridgestone aircraft radial tires. Asahiko Nishiyama, Vice President and Senior Officer, who attended the award ceremony on May 18, commented “It is very honorable for Bridgestone to receive this award for two consecutive years. Bridgestone would like to express its sincere gratitude for kind support of the Boeing Company, and we will continue our efforts to improve our performance in the future.” For more information on the Boeing Supplier of the Year award, including a complete list of award recipients, visit http://boeing.mediaroom.com/index.php?s=43&item=1753