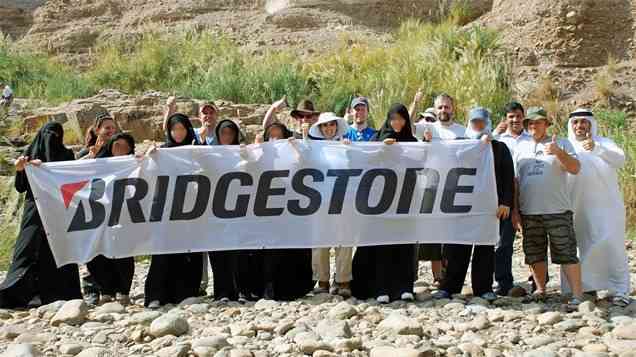 Bridgestone strengthens support for Wadi Wurayah Mountain Protected Area with Emirates Wildlife Society & World Wildlife Fund (EWS-WWF) and sponsorship of educational environmental field trips Dubai, December 13, 2011 – As part of its commitment to help ensure a sustainable society through protection of biological diversity across the Arabian Gulf, Bridgestone Middle East and Africa FZE has strengthened its support for the Wadi Wurayah Mountain Protected Area with Emirates Wildlife Society in association with WWF (EWS-WWF). The world’s leading tyre manufacturer continued on its second year of support for the environmental project with sponsorships on educational field trips for local schools and colleges. This follows last year’s support of the project by supplying camera traps within the protected area, and resources to monitor wildlife activity for the research efforts in this protected natural environment of Fujairah. One of the recently sponsored educational field trips took place last week, with a group of 30 female students from the Higher Colleges of Technology Fujairah Women's College. The students gathered in the 127 km² protected environment at the source of its fresh water springs, where they took part in three workshops facilitated by EWS-WWF on Hydro-geolology, Terrestrial Wildlife and Freshwater Ecosystems of the area to discover what makes this environment and its conservation so important. ‘At Bridgestone we want to help ensure a healthy environment for current and future generations,’ said Mr. Shoichi Sakuma, President of Bridgestone Middle East & Africa. ‘Wadi Wurayah is an important inheritance for the UAE, and more people need to understand what makes it so precious, and yet so vulnerable. Young people, who are the future of this region, need to learn why they should respect this unique and vital area of the nation, and protect it for the benefit of generations to come. The importance of the work being carried out here by EWS-WWF cannot be underestimated, and at Bridgestone we are proud to be able to contribute to it.’ Wadi Wurayah is a mountain area in the emirate of Fujairah which was officially declared a Protected Area in 2009 – the first in the UAE. And in October 2010, Wadi Wurayah officially became the site number 1,932 on the wetlands list of international importance for biodiversity conservation under the Ramsar Convention. Wadi Wurayah is an important area because of its environmental significance as well as its cultural importance; it has rare and endangered wildlife species, archaeological sites and a rich cultural heritage. Its fragile and unique ecosystem is one of the few remaining catchments intact in the UAE, and its protection has become essential for the survival of many rare species. ‘Those living in the UAE should understand the importance of Wadi Wurayah and the value of this exceptional place’ said Christophe Tourenq, Senior Conservation Manager EWS-WWF, who led the Freshwater Ecosystems workshop. ‘Because of the freshwater available all year round, there is an ecosystem with unique species depending on it that we need to preserve’. ‘Today we learnt so much about wildlife and geology and find out that there animal species living in the area that we absolutely had no idea of,’ said one of the first year students from Applied Media class of HCT Fujairah Women's College attending the trip. ‘We had the incredible chance to experience first-hand something we had only read about in books.’ ‘We are looking forward to have an Eco-Friendly infrastructure in place which can serve the visitors and the nature equally’ said Maral Khaled Shuriqi, Geologist from Fujairah Environment Protection Department who ran Geology and Hydrology workshop. ‘Education is the key for a better understanding to our local environment and it is so important to spread the word about having and protecting such a valuable area here in the UAE. In 2010, Bridgestone also sponsored the installation of twenty camera traps in the Mountain Protected Area which allows EWS-WWF to observe the wildlife that resides within the area which is an integral part in the conservation efforts for the existing biological diversity in the wadi. Valuable images of various wildlife species in the area were captured in their natural habitat such as the caracal, red fox, Blanford’s fox, Gordon’s wildcat, Arabian tahr and Brandt’s hedgehog to name a few, providing critical data and insights into the animals’ behavior. Bridgestone’s collaboration with EWS-WWF in the region is not limited to Wadi Wurayah; it also supports the Marine Turtle Conservation Project for the tagging and tracking of Hawksbill turtles, a critically endangered species of marine turtle in the Gulf. The Bridgestone Group is committed to continually working toward a sustainable society with integrity and taking decisive action with respect to three important environmental perspectives: ecological conservation, resource conservation and reducing carbon emissions. Providing educational activities and awareness to the community about sustainability and eco-friendliness is one of the key actions to achieve these objectives in the region.