ONE IN FOUR DRIVERS IN THE GCC DOES NOT CHECK THEIR TYRES, BRIDGESTONE SURVEY REVEALS 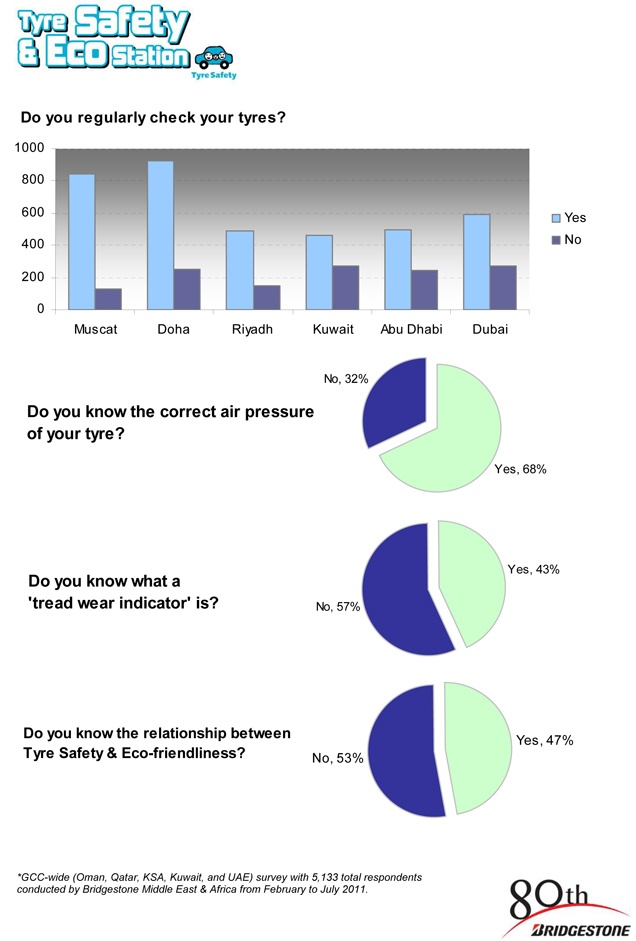 Drivers in Kuwait and UAE least likely to check tyres for safety A third of GCC respondents do not know the correct air pressure for their tyres; more than half do not know what a ‘tread wear indicator’ is More than 5,000 drivers surveyed across the GCC; over 8,000 Bridgestone Tyre Safety Compact Gauges freely distributed Dubai, August 10, 2011 – Bridgestone Middle East and Africa FZE today unveiled results from a GCC- wide survey on vehicle owners’ approach to tyre safety. The survey found that more than one in four respondents (26 per cent) did not check the condition of their vehicle’s tyres - a finding which has serious implications for drivers across the region, with faulty tyres cited as a leading cause of road traffic accidents, particularly during the summer months*. The survey was conducted during the Bridgestone Tyre Safety and Eco Station roadshow which toured major GCC cities from February to July of this year. A total of 5,133 people, mainly between the ages of 21 and 40 (72 per cent), took part in the survey, and more than nine out of ten respondents (91 per cent) were male. “The results are worrying with regards to the number of people potentially travelling in unsafe vehicles,” said Shoichi Sakuma, President of Bridgestone Middle East & Africa. “Our survey revealed that one in four drivers is placing their life, and the lives of their families and other drivers, in danger, simply because they do not check the proper condition of their tyres.” Of those surveyed by Bridgestone, three quarters (74 per cent) said that they check either their tyres’ physical state - for example if they look deflated or if the treads are worn - or their tyres’ air pressure. Almost half (47 per cent) of those drivers who practice tyre checks only claimed to do so every three months or even less frequently, also putting themselves at risk as it is recommended that tyre checks for air pressure and tread wear should be carried out at least once a month. Of those who did not check, the principal reason for failing to do so was a lack of knowledge, with almost half of those who didn’t check (44 per cent) saying ‘I do not know how’. This figure rose to two thirds of those respondents in the UAE (Dubai, 68 per cent and Abu Dhabi, 63 per cent). Drivers in Muscat were the most likely to check their tyres (87 per cent), followed by four out of every five drivers in Doha and Riyadh conducting tyre checks (79 per cent and 77 per cent respectively). Kuwait had the lowest results, with less than two thirds (63 per cent) checking their tyres, and Dubai and Abu Dhabi fared little better (67 per cent and 68 per cent of respondents respectively). Sakuma added, “A quarter of the survey participants have never checked their tyres at all and currently don’t know what condition they are in. This is disturbing, as the only possible indicator for these drivers to change their tyres would be when a tyre deflates, which could prove dangerous if the vehicle is on the move.” Equally alarming are levels of awareness among respondents about the correct air pressure measurement (psi / kpa / bars) to be maintained in their tyres, with one third (32 per cent) of respondents stating they ‘do not know’ what it should be. Proper tyre air pressure varies according to vehicle type. Drivers should check on the driver’s door or petrol cap, or in the owner’s manual for the correct air pressure to be maintained in their tyres. An even greater number (57 per cent) did not know about the ‘tread wear indicator’ on tyres, which are small triangle marks around the tyre sidewall which indicates the minimum level the tyre tread can wear down for safe use. Additionally, more than half (53 per cent) of all survey participants did not know that there was a relationship between tyre safety and eco friendliness. Driving a vehicle on properly inflated tyres helps to reduce rolling resistance, which aids in reducing fuel consumption. “A few moments to check your tyres will significantly reduce the possibility of leading to an accident, and will render the vehicle slightly more fuel efficient, saving you money,” added Sakuma. Bridgestone’s aim is to help lower the levels of road traffic accidents in the region through education and awareness on proper tyre care and maintenance. The first ever Bridgestone ‘Tyre Safety and Eco Station’ roadshow was a part of the company’s safety initiatives. The roadshow began last February in Muscat, and continued to Doha, Riyadh, Kuwait City, Abu Dhabi, and finally ended in Dubai on July 1. As direct encouragement for families and drivers to practice tyre safety, Bridgestone freely distributed more than 8,000 tyre safety compact gauges to mall-goers and survey participants throughout the GCC-wide campaign. The roadshow station was designed for families with children accompanying their parents, with a section dedicated to kids for eco-themed drawing activities while their parents learnt about tyre safety. Through crayons and paper, as part of Bridgestone’s aim to educate future generations about eco- friendliness and sustainability, kids were able to express their thoughts on how they could help protect mother earth, with approximately 3,350 creative artworks gathered throughout the GCC roadshow. As a core part of its corporate aim to provide a safe and environment-friendly society, Bridgestone will continue its Corporate Social Responsibility initiative, Tyre Safety & Eco Station, in the Middle East & Africa region, helping families and drivers to learn and practice tyre safety for the betterment and sustainability of future and current generations.