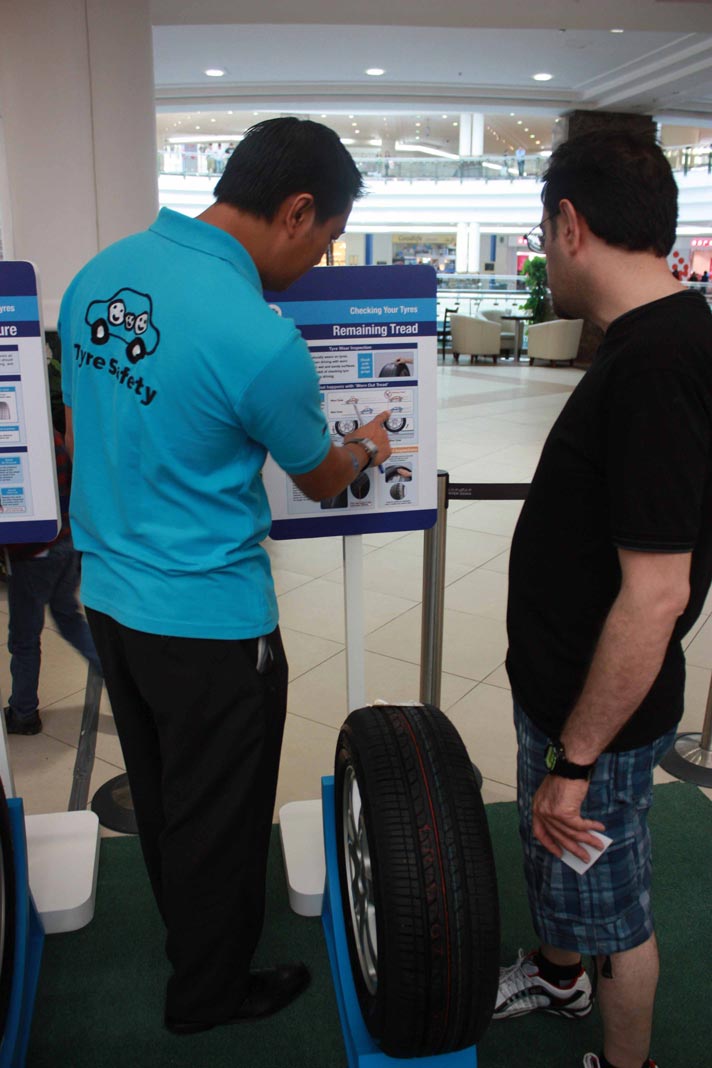 Doha, March 24, 2013 - Bridgestone officially launched its third annual ‘Tyre Safety and Eco Station’ (TSES) campaign in Doha. The TSES multi-purpose station was set up on the ground floor of the popular City Centre Mall and was officially inaugurated by HE Sheikh Faisal bin Qassim bin Faisal Al Thani, Chairman of Aamal QSC. The station was open to visitors from 2pm to 10pm and will run its education and awareness campaign on Tyre Safety From Thursday, 21st March until Saturday the 23rd of March. The ribbon-cutting ceremony was also attended by Bridgestone Middle East & Africa FZE representatives including Deep Rajendran (Manager for Corporate Communications & Training at Bridgestone Middle East & Africa FZE), as well as key representatives from Aamal, the company’s trusted distributor for Qatar that fully endorsed the initiative. A survey conducted during last year’s road show, revealed that 47% of the Qatari motorists didn’t check their tyres consequently increasing the chance of being involved in an accident. Of those who did check their tyres, only a small percentage admitted they did it regularly (16% once a week as Bridgestone recommends and 33% only every three months). When asked why they didn’t check their tyres? 19% said they didn’t know how to do it. Even more surprisingly, 57% didn’t know what the tread wear indicator was and another 54% were not aware of the meaning of ‘tyre rolling resistance’ and its impact on the environment. “Figures from last years survey show that there is still a lot to do education-wise. At the Bridgestone TSES, drivers will not only be shown how to check a vehicle’s tyres correctly, but will also be encouraged to test what they learn using the simple procedures at the stand,” added Mr Deep Rajendran. The TSES campaign was developed by Bridgestone Middle East & Africa FZE as part of its corporate social responsibility initiatives and has been educating motorists across the GCC and North Africa for the last two years. Bridgestone is keen for drivers to understand the vital role that tyres play for keeping a vehicle safe on the road, and that taking a few minutes to check the car’s tyres before driving can significantly reduce the risk of having an accident. The TSES station has a special demonstration corner where Bridgestone staff can educate visitors with simple steps to enhance their safety while driving on roads. Drivers are shown and can practice how to check the proper tyre air pressure and tread wear to avoid the dangers of driving with underinflated/overinflated and worn-out or damaged tyres. The booth also hosts a section entirely for kids, where they can have fun with eco-themed drawing activities and face painting, while their parents are learning about tyre safety. As well as pointing out the safety benefits of proper tyre check and maintenance, the campaign also emphasizes the positive environmental impact of maintaining correct tyre pressure. Driving a vehicle on properly inflated tyres helps to reduce the rolling resistance of the vehicle, which aids in reducing fuel consumption hence minimizing motorists’ expenses. The 2013 Bridgestone “Tyre Safety & Eco Station” campaign will continue its tour visiting Bahrain, Oman, KSA, UAE, Lebanon, Egypt and Morocco between March and December this year.