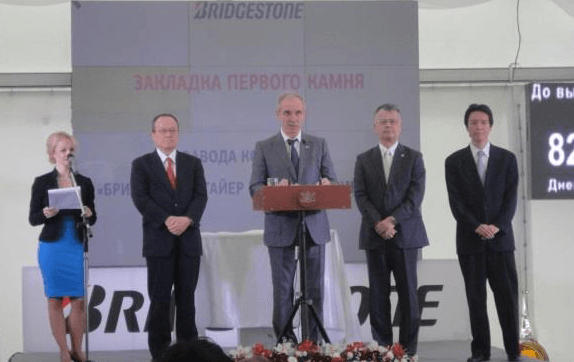 Bridgestone Corporation broke ground at the planned site of a new passenger car radial tire plant in Ulyanovsk Oblast, Russia. The plant is expected to start production in the first half of 2016. The plant will produce passenger car radial tires such as winter tires for the Russia/CIS?1 approximately 12,000 units a day by the second half of 2018. Of note, attending Bridgestone’s celebratory groundbreaking ceremony were Sergey Morozov, Governor of Ulyanovsk Oblast, where the plant will be located; esteemed dignitaries from federal and state government industrial zone business residents; and representatives from Mitsubishi Corporation, which is contributing to the construction of the new plant as a business partner. At the ceremony, introductory remarks were made by Kazuhisa Nishigai, COO and Representative Board Member of Bridgestone Corporation, who said “Bridgestone is building this new plant in order to meet the demand growth with local production and to contribute motorization in Russia with high-quality, safety-secured products”. Subsequently, Hiromi Tanigawa, president of Bridgestone Tire Manufacturing C.I.S. LLC, which will operate the new plant, expressed his enthusiasm for the construction and startup of the new plant and exchanged opinions with other participants. The Russia/CIS region is a large market with a population of approximately 300 million. New vehicle sales in the region have shown strong growth, and demand for tires is expected to increase. Bridgestone is building this new plant in order to meet this demand growth with local production. The Bridgestone Group has previously taken steps to further develop its operations in the region such as expanding its Pole Position retail channel network. The construction of this new plant will enable the Group to be closer to the market, and supply its products to customers in a timely manner.