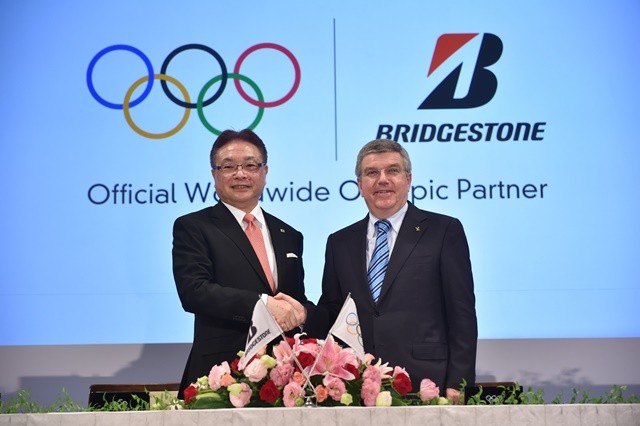 Tokyo, Japan (June 13, 2014) – Bridgestone Corporation (Bridgestone) today announced it has entered into an agreement with the International Olympic Committee (IOC) that makes the world’s largest tire and rubber company an official TOP worldwide Olympic partner through the 2024 Olympic Games. The announcement was made in Tokyo at a press conference and ceremonial signing of the TOP agreement attended by IOC President Thomas Bach; Masaaki Tsuya, Bridgestone CEO and Chairman of the Board; and other company and IOC dignitaries and guests. The Bridgestone relationship with the Olympic Games and the Olympic Movement is effective immediately and includes activation in connection with the Rio 2016 Olympic Games. In addition, Bridgestone has been granted sponsorship activation rights in Brazil, Korea, Japan, and the United States through 2016. Beginning in 2017, Bridgestone’s activation rights will extend globally and will include the PyeongChang 2018 Olympic Winter Games, the Tokyo 2020 Olympic Games and the Olympic Games to be held in 2022 and 2024 in cities yet to be elected by the IOC. The agreement also includes the activation rights at any Youth Olympic Games which may be held during the term 2017 to 2024. The product categories covered by the Bridgestone sponsorship agreement include: seismic isolation bearings, which are used to protect structures from earthquake damage; non-motorized bicycles, a product segment in which Bridgestone has been innovating for more than 60 years; and the full range of tires manufactured by the company, making Bridgestone the Official Tire of the Olympic Games. In commenting on Bridgestone’s TOP sponsorship, Bridgestone CEO and Chairman of the Board Tsuya said, “As a global corporation, Bridgestone is excited to partner with the entire Olympic Movement, a group of organizations that not only brings together the world’s athletes at the greatest athletic festival, but also blends this celebration of sport with a spirit of service to community, social responsibility, a respect for diversity and a commitment to the fundamental principles of Olympism.” He continued by saying, “We look forward to along and mutually beneficial relationship where, through this partnership, we will communicate on a global basis our commitment to society as well as our brand message.” IOC President Bach said “The TOP programme is a truly global sponsorship programme as it benefits all future Games organisers and all the National Olympic Committees and their athletes, ensuring athletes from all over the world, and not just the largest countries, are able to compete at the Games. Indeed, the IOC redistributes over 90 per cent of its revenues to the wider sporting movement. Bridgestone is a global leader in its field and we are delighted to welcome the company to the TOP programme and are excited for the long term commitment they have shown to the Olympic Movement.” The partnership, born of a mutual selection process, gives Bridgestone a strategic global platform which will allow it to reach its customers with new activation and communication methods; build awareness of its brands and technologies; and continue globalizing its operations through the support of its proud teammates around the world. The press conference was also attended by John Coates, IOC Vice-President; Tsunekazu Takeda, the IOC’s Marketing Commission Chairman, President of the Japanese Olympic Committee(JOC), and Vice-President of the Tokyo 2020 Organising Committee of the Olympic and Paralympic Games; Yoshiro Mori, President of the Tokyo 2020 Organising Committee of the Olympic and Paralympic Games; Naoko Takahashi, Executive Board Member of JOC, and Sydney Olympic gold medalist in marathon; and Kosuke Kitajima, Athens Olympic and Beijing Olympic gold medalist in swimming (breaststroke). Bridgestone operates in alignment with its mission of “Serving Society with Superior Quality” and endorses the fundamental principles of Olympism, the goal of which is to place sport at the service of the harmonious development of humankind, with a view to promoting a peaceful society and the preservation of human dignity.